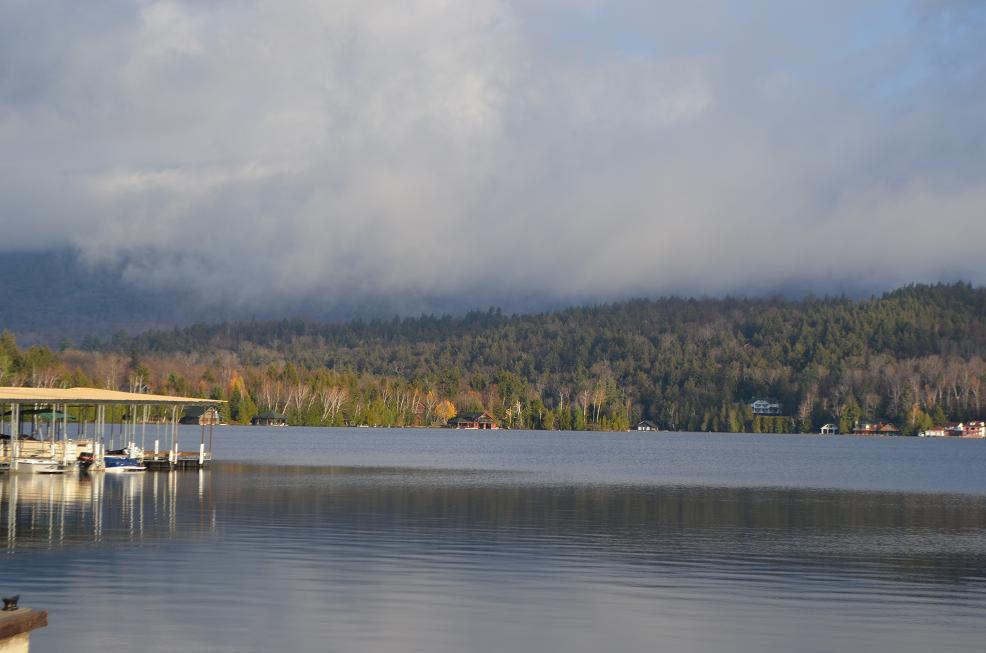 Saturday’s Day 2 sun came up to reveal heavy clouds laying low over the Adirondack High Peak Wilderness.  The High Peaks name is given to a group of 46 Adirondack Park mountains in the Lake Placid area, each in the neighborhood of 4,000+ feet in height.  Perhaps the best known of the High Peaks is Whiteface Mountain, home to the Olympic ski venue.

Following breakfast and our Driver’s Meeting, teams were instructed to line up for departure at a parking lot just down from our Mirror Lake Inn home base.  Once again start time was 9:00AM plus car number. 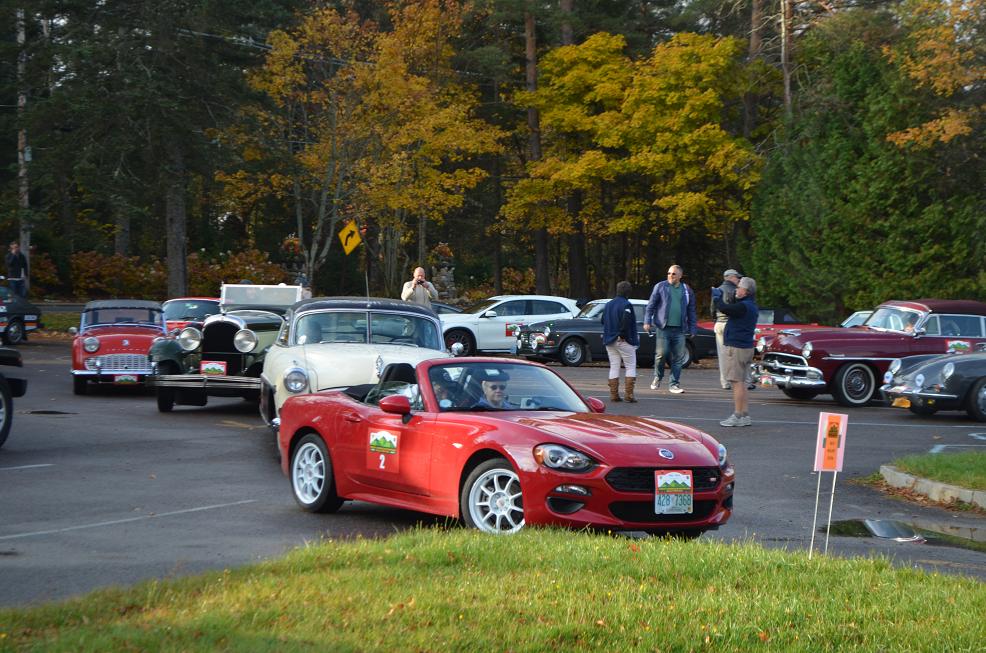 Above:  Lisa (driver) and Luis, the #2 Fiat Spider team await their 9:02AM departure on Day 2.  We befriended the Fiat team during the 2018 rally where we also trailed them in the #3 position.

Day 2’s tour was a literal circuit destined to return us at day’s end back at our Mirror Lake Inn base.  Driving into and through the High Peak shadows, our day was full of beautiful twists and turns.  Our travels were to be 46 miles shorter than the 185 miles we covered on Day 1, yet our Day 2 Route Instruction packet jumped from four pages to six because of all those turns!  The names of the roads that we enjoyed this day, provide an insight into the landscape the rally teams took in:  Union Falls Road, Alderbrook, Blue Spruce Drive, Balsam Woods, Kushaqua Mudpond Road, Rainbow Lake Road, Fish Hatchery Road… 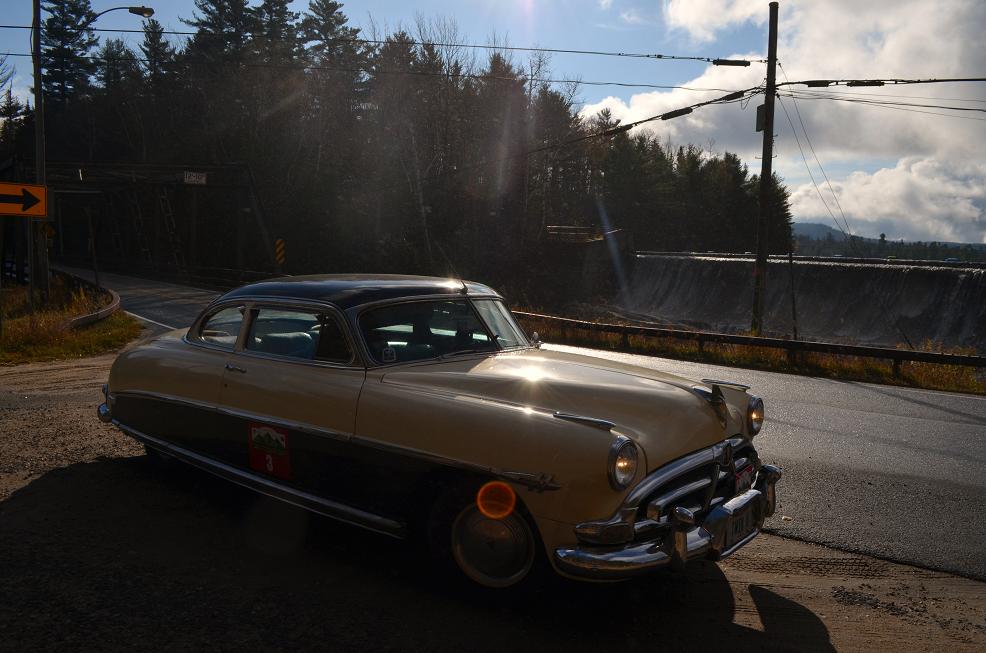 Day 2’s second Regularity Section proved to be somewhat of a challenge.  For us this regularity section provided vivid proof that not all cars are equally up to the varied road conditions encountered along the prescribed rally pathway. 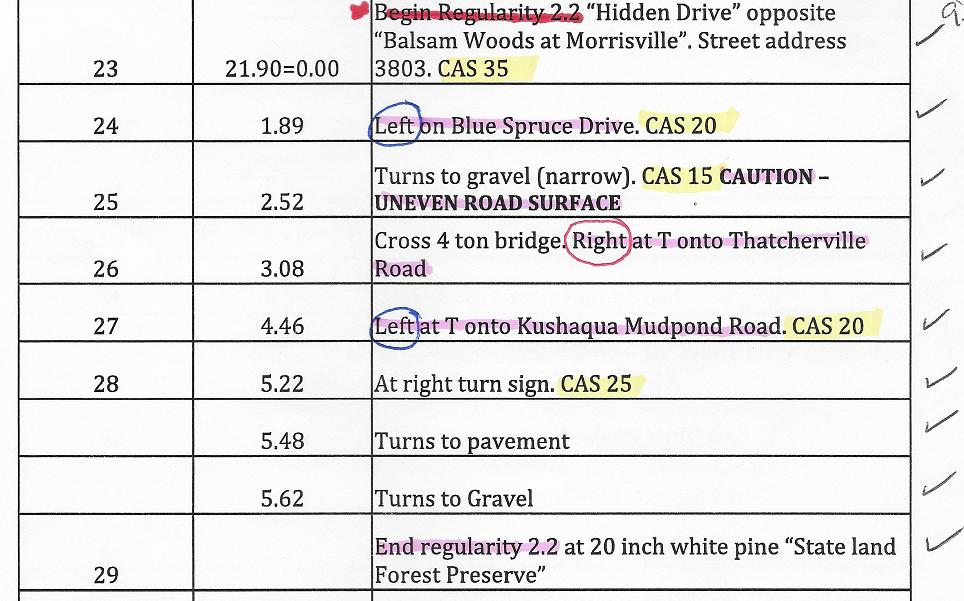 There were five speed changes and a wide assortment of roadway surfaces and widths.  There was a narrow, gravel, uneven road surface at an average speed of 15mph that was somewhat of a challenge, but it was during the final, mostly gravel stretch at an average speed of 25mph when I said something to Lynn about our friends, Jeff and Danny in Jeff’s 1959 Triumph TR-3, the #5 car.  While our old Hudson Hornet swallowed up those bumps and jostles with minimal complaint I knew that Jeff would have a sincere challenge maintaining that 25mph average speed without destroying his car, their spinal columns or both. 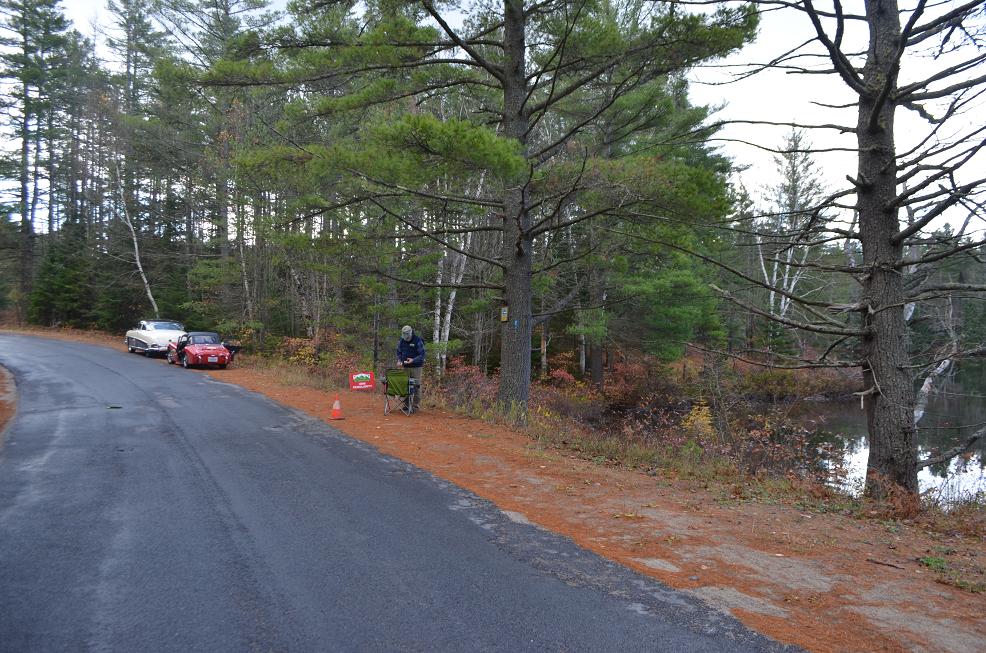 After Lynn checked in with the rally official at the end of Regularity 2.2, and we were no longer on the clock, I pulled out the camera to capture a picture of that 20 inch white pine at the End Regularity sign as well as that scenic adjacent pond.  Right on cue, Jeff and Danny flashed across the line in the TR-3.  Jeff unfolded himself from the Triumph and immediately launched into a verbal tirade concerning the status of his car and his kidneys!  It was great!!  Talk to me real nice Jeff and maybe next year I’ll loan you a Hudson for the GAMRR! 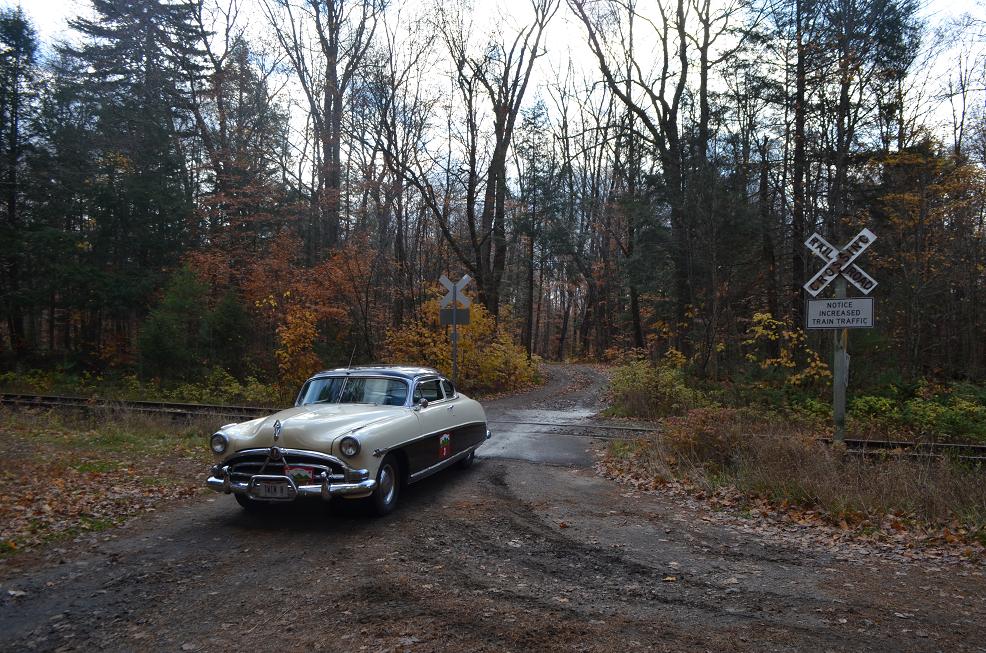 Deeply tucked into the heart of the Adirondack wilderness, rally teams were guided down a dirt road, across a railroad track, and “right at the Y” to the Little Clear Pond access parking.  Little Clear Pond is rather large by Ohio pond standards, but it is indeed clear.  Vividly posted as a “NO FISHING” body of water, Little Clear Pond is used by New York State as their one and only Adirondack Fish Culture Station in which they raise landlocked Atlantic Salmon.  In early November adult female fish are captured and released after the harvesting of their eggs.  The collected eggs are fertilized and raised at remote state fish hatcheries.  Ultimately the salmon babies (fry) that come from these efforts are released in assorted Adirondack waterways to maintain healthy levels of this acrobatic jumping salmon species. 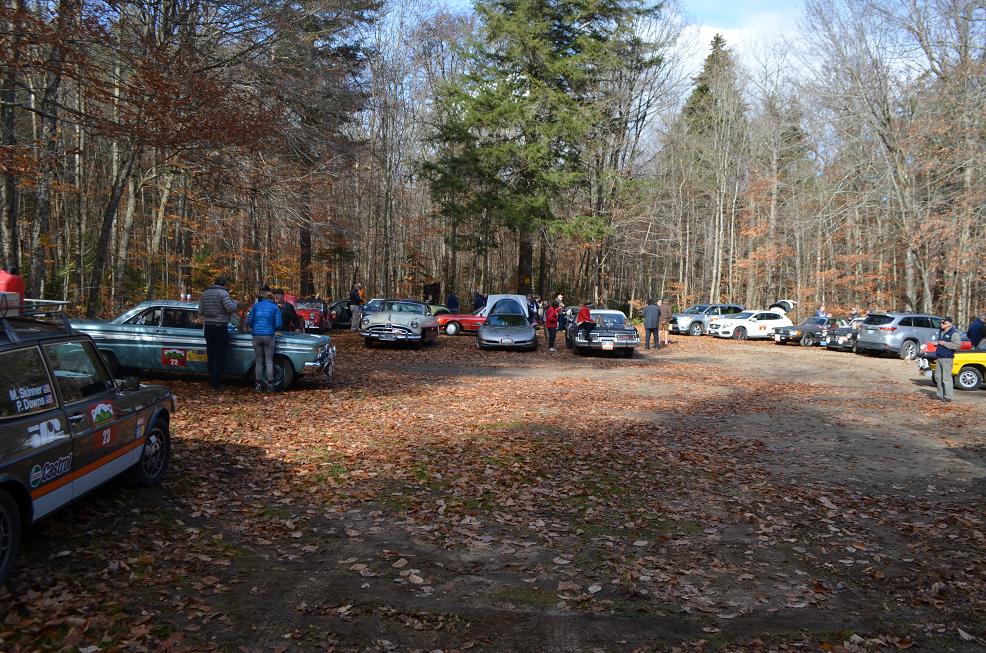 Restaurants are rather non-existent within the High Peaks Wilderness so it was here at the Little Clear Pond parking area that rally teams had time to enjoy the sack lunches we had been given at the morning Driver’s Meeting. 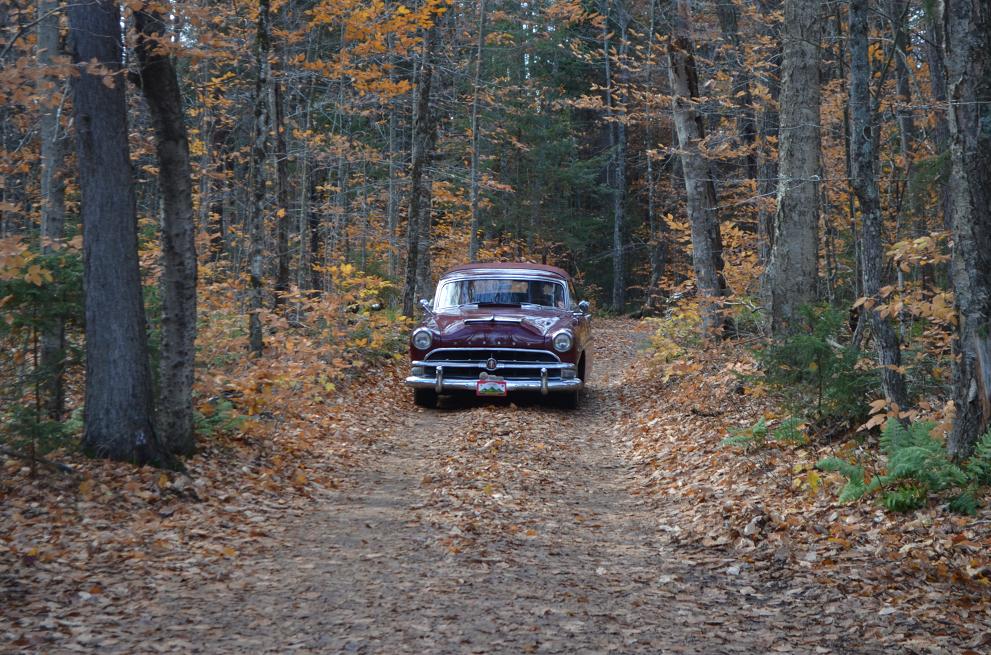 Above:  Noel & Cynda’s 1954 Hudson Hornet pulls through the Little Clear Pond access road for a bite of lunch. 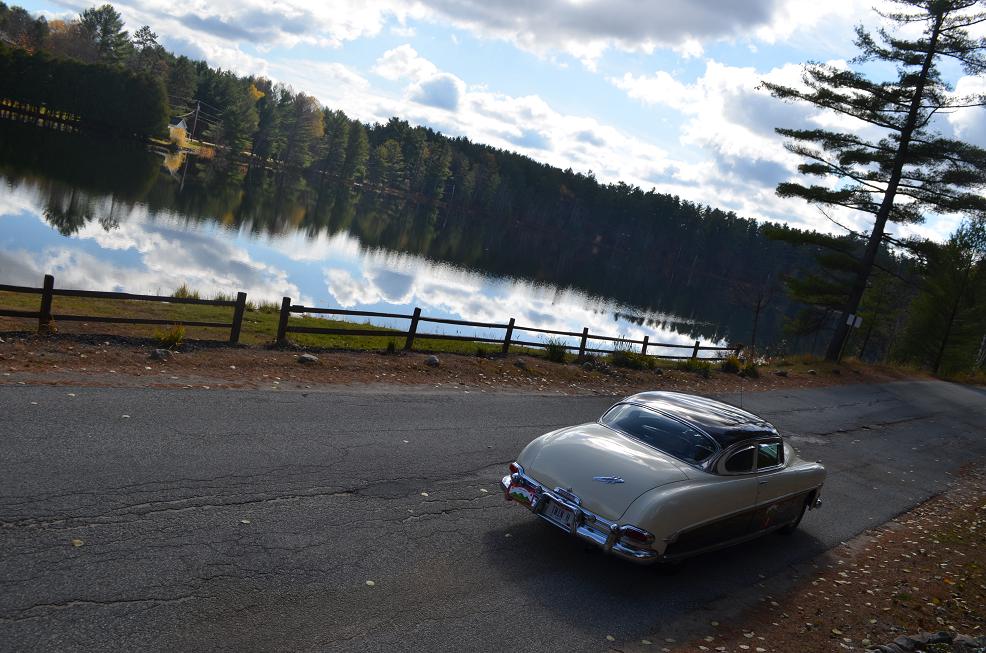 Between the day’s 3rd and 4th Regularity Sections we found ourselves in the beautiful outskirts of the village of Saranac Lake.  It was here that we enjoyed a leisure drive on Forest Hill Avenue around Moody Pond.  Our “mood” was exceptional! 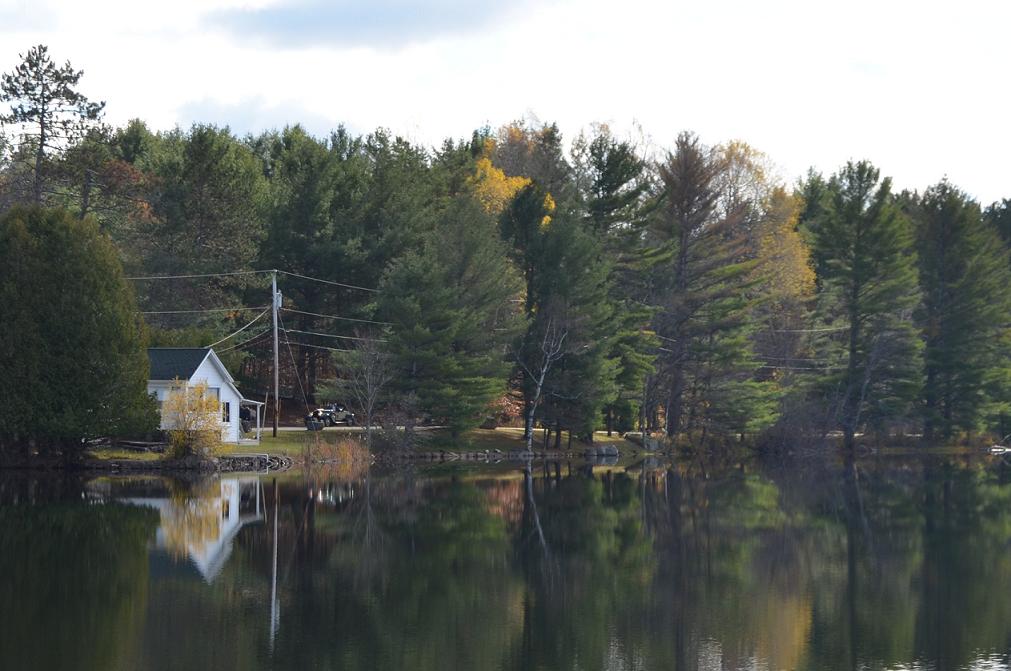 Above:  We could look out across to the other side of Moody Pond to see the #4 car, a 1928 Chrysler out of Ontario, hot on our tail. 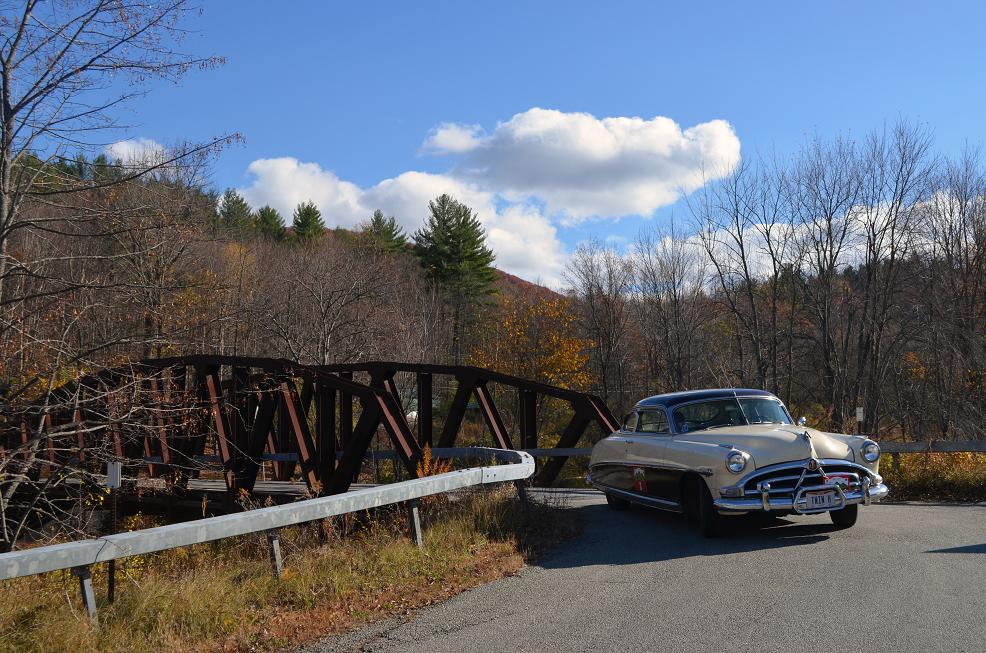 Above:  crossing the one-lane bridge on Lacey Road.  We had completed Day 2’s 5th and final Regularity Section and were slowly weaving our way back toward Lake Placid from the southeast. 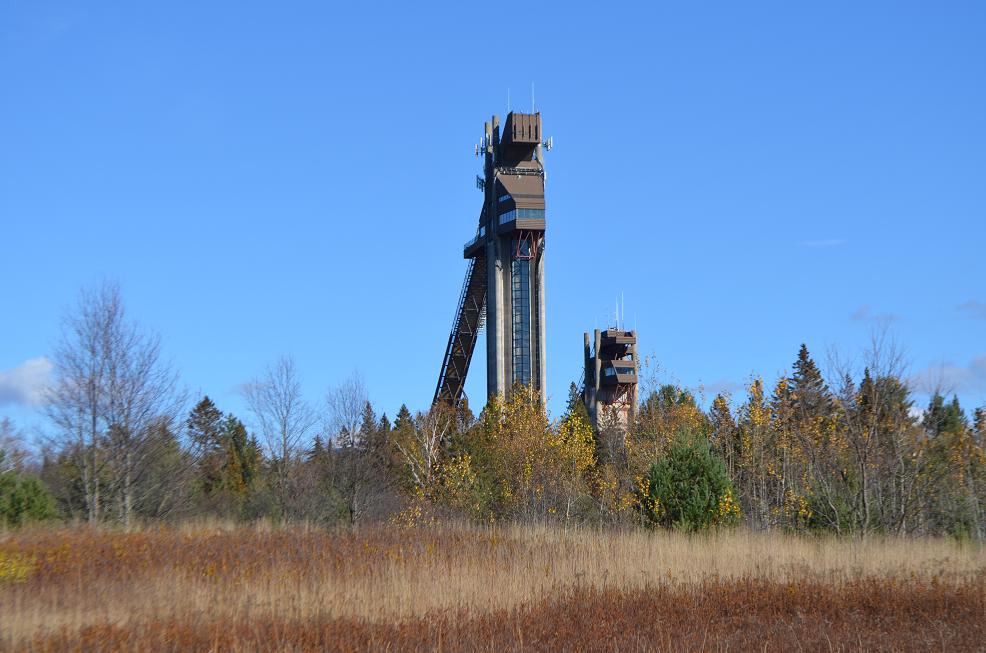 Above:  We knew we were close to home when we started seeing things like the Olympic ski jump ramps. 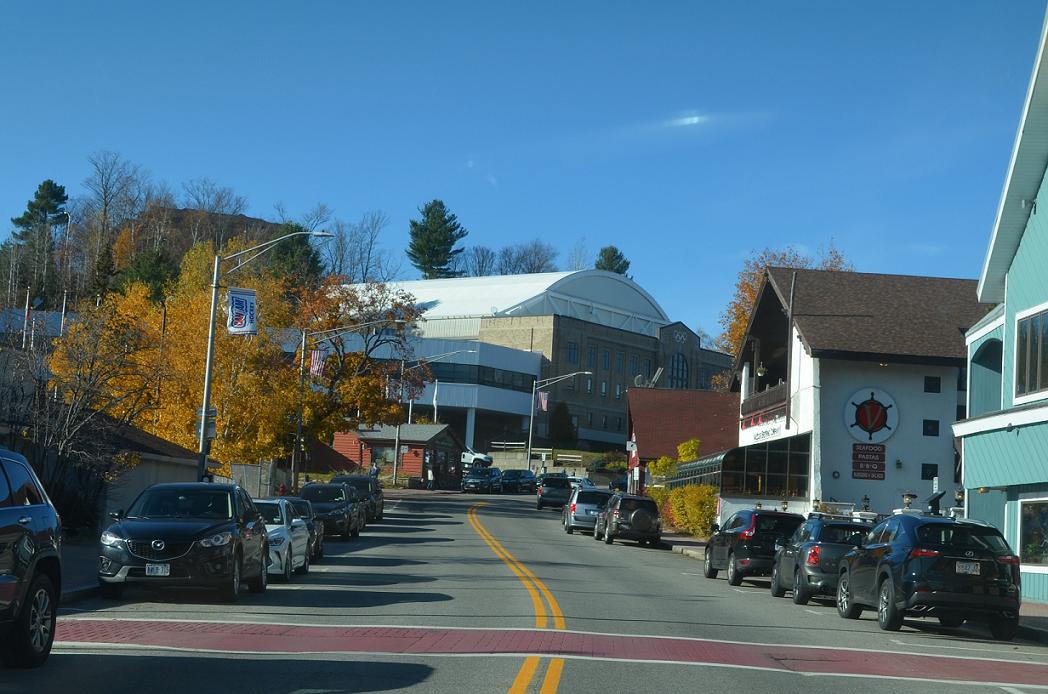 Above: Cruising back into Lake Placid on Main Street, we came face-to-face with the “Miracle on Ice” arena. 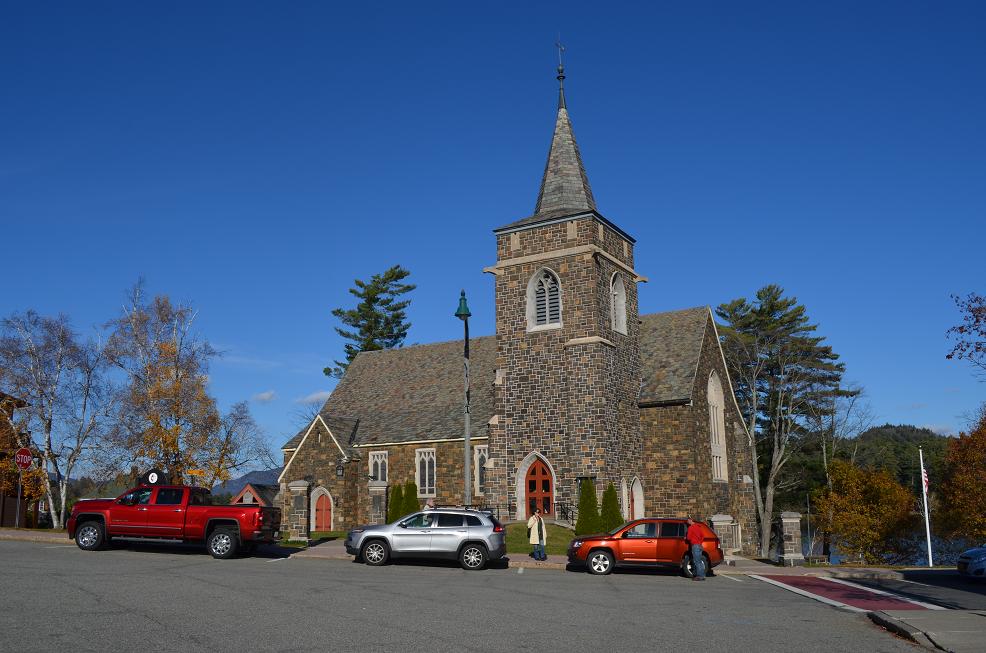 Above:  The Adirondack Community Church is one of Lake Placid’s architectural gems. 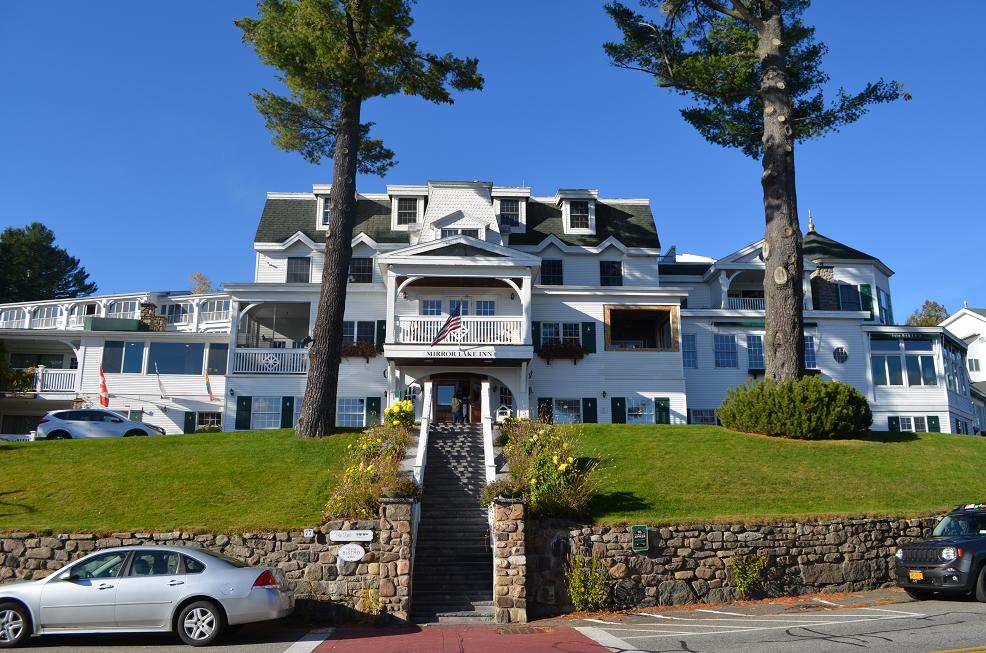 Above:  It was around 3:30 when the Hudson rolled back into the parking slot at the Mirror Lake Inn.  The morning’s clouds had been traded for pristine blue skies! 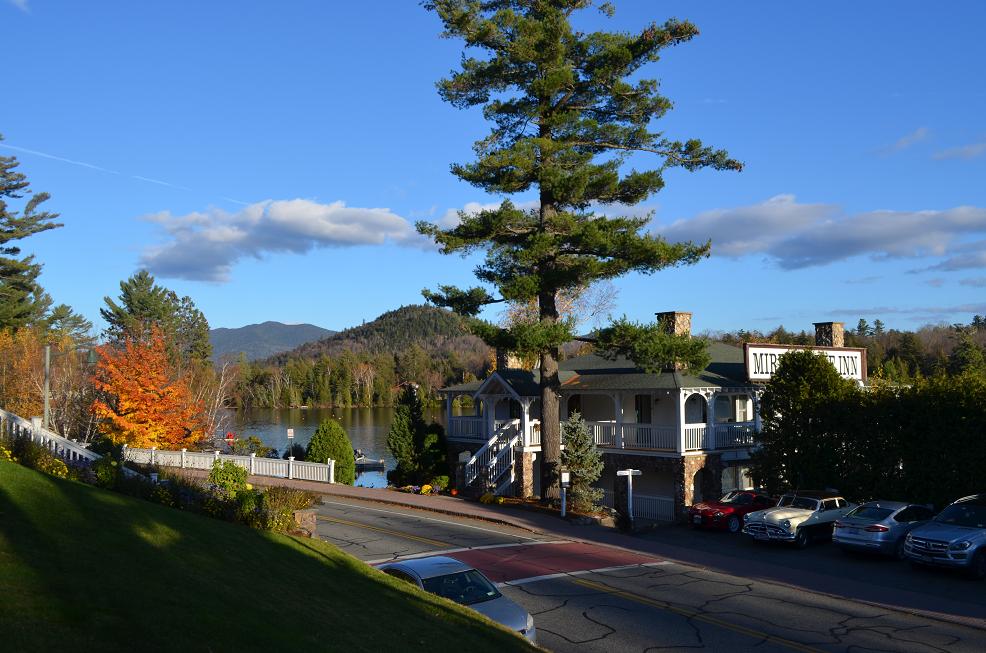 Above:  Initially, Lynn and I had been a bit disappointed when we learned that our room was in what they called the Mirror Lake Cottages across the street from the main inn. 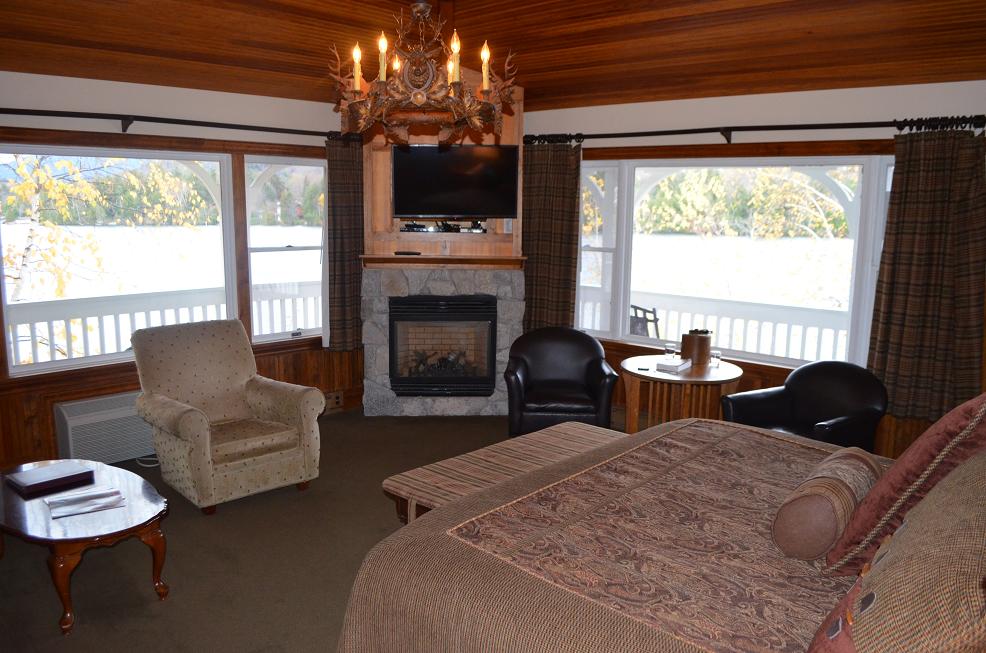 Above:  But in the end we had it made!  Our stunning Cottage room was directly at the lake shore. 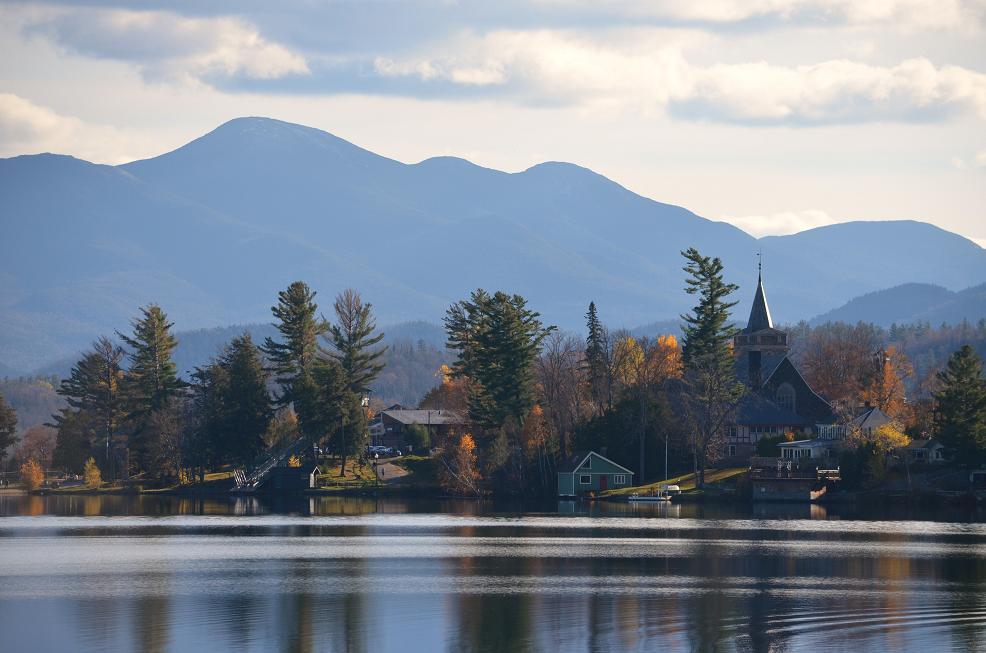 From our wrap-around porch Lynn and I could look out across Mirror Lake at the village skyline and the High Peaks behind.  The highest peak in the photo is Mount Marcy.  At 5,344 feet, Marcy is the highest of the 46 High Peaks. 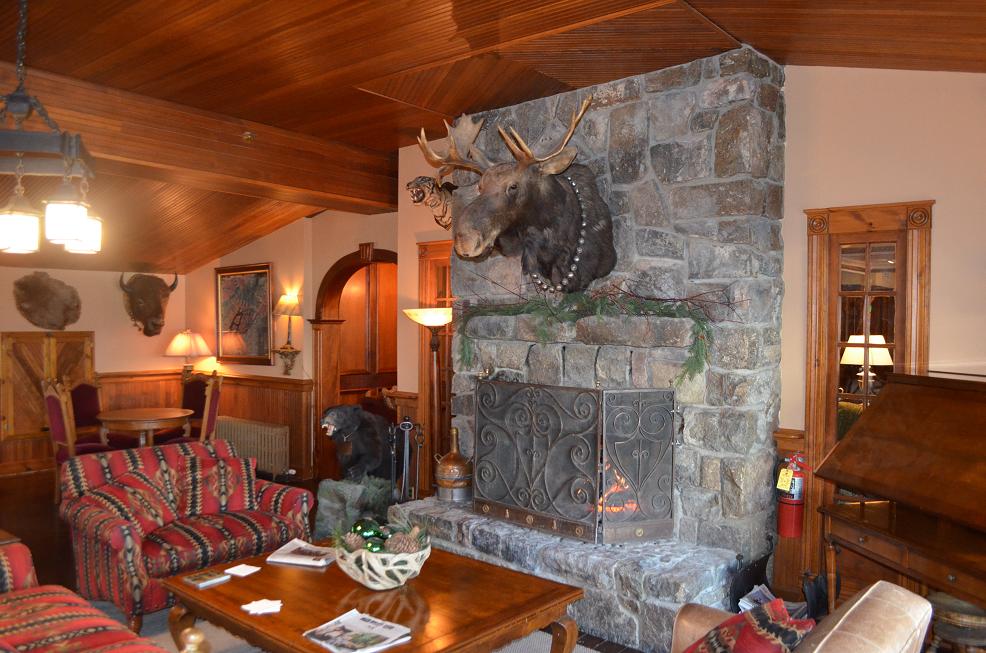 Following an afternoon free for exploration and napping, we all came together at 7:00pm for dinner at the Mirror Lake Inn dining room.

Following the first (2018) running of the Great American Mountain Rally Revival there was a certain degree of publicity and story-telling that went on.  Gary was contacted by a gentleman who caught wind of some of those stories.  Mr. Peter Bullard of Dartmouth, Massachusetts had been the navigator for his best friend, George Foss in 1956 when they put a 1954 Jaguar XK140 Coupe through its paces in the GAMR, as well as in 1957 with an Alfa Romeo Gulia.  Mr. Bullard was delighted that someone had come along to breathe new life into the rally tradition that had been a big part of his life 60+ years ago.  In the end Gary was invited to Mr. Bullard’s home where he was enthralled with his tales of adventure and captivated by the abundant bits of ephemera that remained from those original rally efforts.   Indeed Gary utilized the original artwork from the cover of the 1956 “Rules and Regulations” document for the 2019 GAMRR T-shirts! 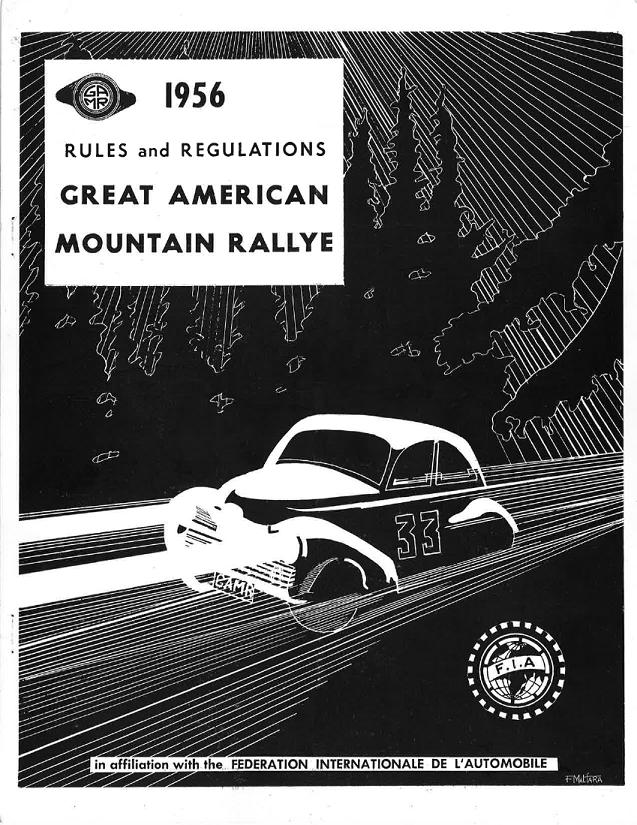 Mr. Bullard’s family talked of how Peter had never really spoken much about his participation in the GAMR.  But Gary’s visit opened the taps and one story followed another.  Steve Bullard, Peter’s son, shared one of his father’s tales from the 1956 rally.  We have to remember that the original rallies were run on Thanksgiving weekend each year.  Almost always there was snow in the mountainous passages.  Peter and George had pulled to the side of the road and were struggling with a set of tire chains for their Jaguar before attempting a mountain ascent.  Quite out of the blue, along came one of the Saab entries, whose driver pulled the parking brake, spun the car into reverse position, and immediately set off up the incline backward with no chains, leaving the frustrated Peter and George to their work! 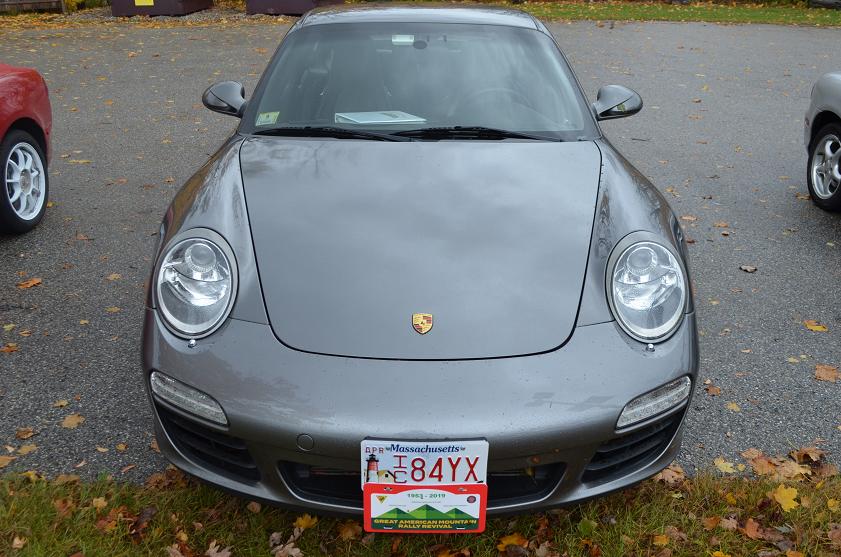 Ultimately Peter’s son, Steve, and Peter’s grandson, Matt were captivated by the rally enthusiasm to the degree that they felt compelled to enter their own Porsche 911 in this year’s running of the GAMRR.  Their’s was a lovely story that united past and present, three generations,  and the world’s ongoing love affair with automotive exploits.

As we were sent off to bed that night, there was open discussion for the first time of the weather that was forecast for the rally’s 3rd and final day.  During the previous year’s rally we had been handed an alternating weather pattern, dry one day, rain the next.  This year we had been blessed with dry roads each and every day.  For Day 3 however, we were looking at a rather certain day-long rain with high winds and a low ceiling.  It was an awareness that haunted my dreams that night.