2019 Great American Mountain Rally Revival- And They're Off!

Saratoga Springs is probably best known for its rather legendary one-mile thoroughbred race track.  Just up the road however, is another gem, the 2,500 acre Saratoga Spa State Park.  Nestled here, down the Avenue of the Pines, at the park’s heart is the old Saratoga Bottling Plant.   The beautiful neo-classic structure was built in 1934 and today is home to the Saratoga Auto Museum. 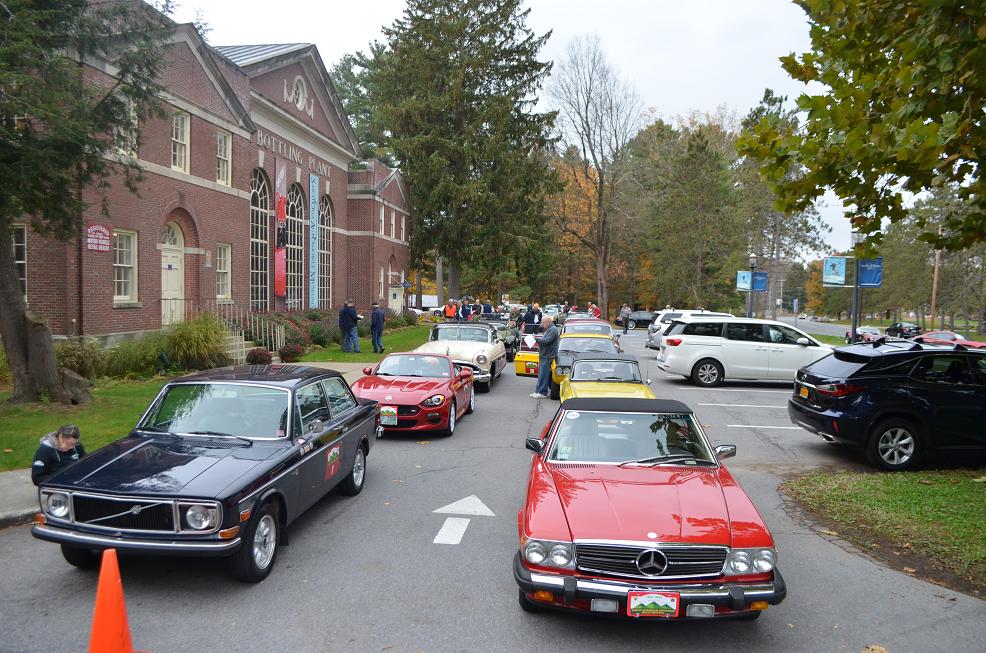 The registered cars were numbered from 1 through 32.  Museum staff was waiting for us as we started rolling in around 7:00am.  They carefully aligned the cars in numeric order in preparation for the 9:00am start sequence.  Each car was to go off at 9:00AM plus your car number.  Lynn and I, as car #3 were destined to depart at 9:03am.

There were a number of things I was excited about for this year’s running of the GAMRR.  Chief among them was the fact that we were NOT the only Hudson registered for the rally.  Noel and Cynda Renner are wonderful friends that we know through our membership in the Hudson, Essex, Terraplane Club.  Noel is an expert mechanic in general, a transmission-specialist in particular and a Hudson lover through and through.  It is people like Noel and Cynda who have inspired Lynn and me to do crazy things like setting out half way across the continental United States in a 67 year old automobile.  Early this spring Cynda came to me and told me that she and Noel had read about our adventure in the 2018 running of the GAMRR.  The more questions she and Noel asked, the more excited they got.  In the end, they too registered to join us for this year’s rally! 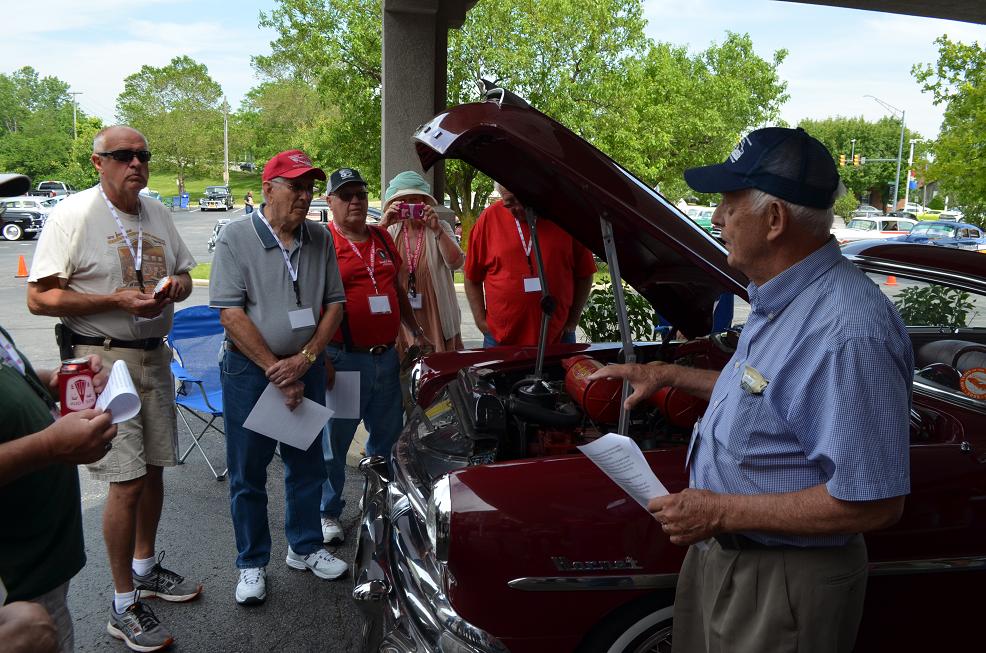 Above:  Noel Renner uses his 1954 Hudson Hornet convertible to share a “Helpful Hints for Hudson Drivers” lecture at the June 2019 meeting of the Central Region of the Hudson Essex Terraplane Club in Findlay, Ohio.

Thirty minutes before start time rally officials distributed the Day 1 Route Instructions list.  At no other time are the differences between the driver’s and the navigator’s duties more apparent than at this time.  Navigators immediately begin pouring through the day’s instructions looking for various pieces of the day’s journey.  Early in the route will be an odometer check during which participants zero their odometer, follow a prescribed path, and, at the end, compare their odometer reading to the official odometer utilized in laying out the rally route.  Any odometer discrepancies will need to be considered in every mileage calculation from that point forward.  The navigators want to see where and when the assorted timed “Regularity Sections” fall within the day’s travels.   Lynn has her own notation system involving a series of three colored highlighters and two colored ink pens.  In a matter of minutes she had absorbed and digested the details of what was to take place that day.  I spent time getting our clock synchronized with the official rally master clock, checking the oil and coolant levels, and getting acquainted with other fidgety rally participants.

Lynn and I watched 9:01AM come and go with the departure of the Volvo.  At 9:02AM the Fiat quickly disappeared from sight.  The very moment we had been awaiting for months was upon us.  We pulled up alongside the starter with the official clock clutched in her hand.  It is amazing how long one minute can feel when you’re staring at a clock.  But with patience, the clock turned to 9:03AM, my foot traveled from brake to accelerator, and our rally began!  “Left at stop sign onto Avenue of the Pines”. 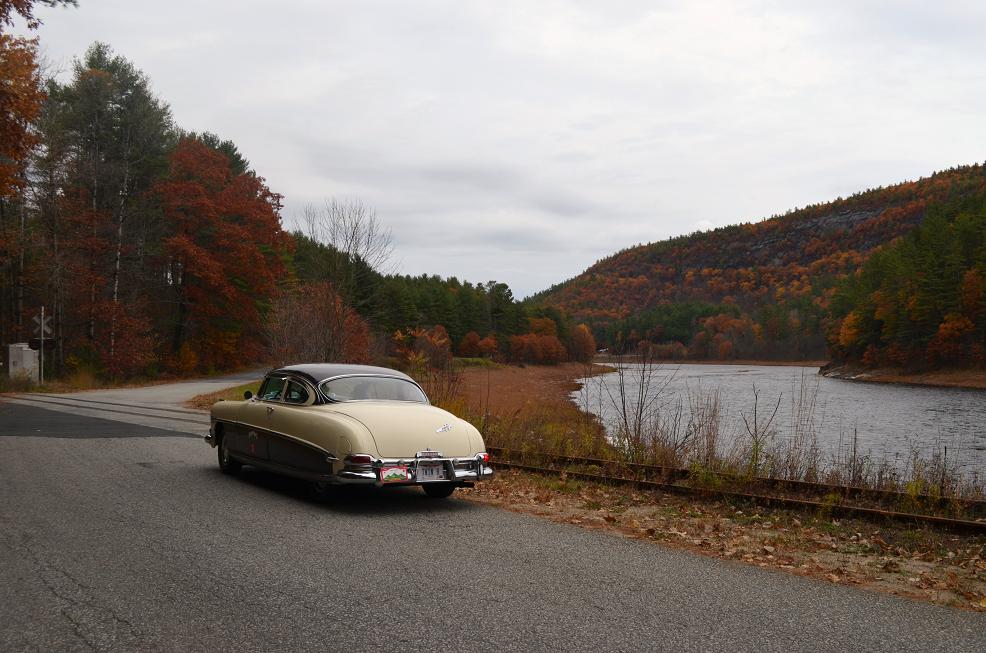 In general our early travels took us out of town to the north alongside the Hudson River, and into the boundaries of the Adirondack Park.  Established in 1885 the Adirondack Park was the first state preserve of its type in the nation.  While most forest preserves consist mostly of unsettled woodlands and waterlands, the Adirondack Park is about 52% privately held land.  The park is populated by more than 130,000 people in 102 towns and villages, and dotted with farms, businesses and an active timber harvesting industry.  At 6.1 million acres in northeastern New York, the park makes up nearly 20% of the entire state’s land mass.  With more than 10,000 lakes and 30,000 miles of rivers and streams, the park was designated a National Historic Landmark in 1963.  It is one of America’s great experiments of conservation within an industrialized world. 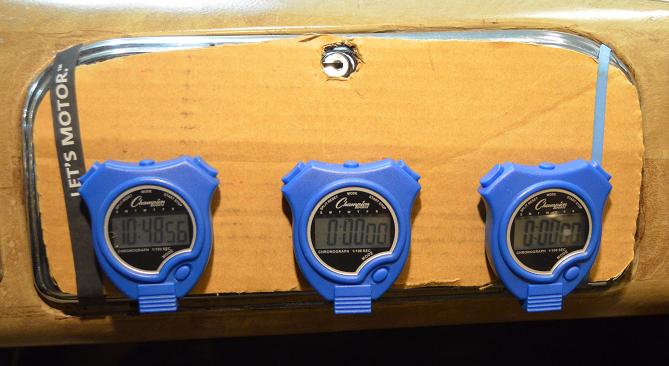 Just 28 miles into the route we were on Turner Rd looking for the “Caution Muddy Road” sign alongside the green “START Regularity Section” sign.   It was the first of Day 1’s five timed Regularity Sections.  Somewhat counter-intuitively, our instructions at each “START” sign are initially to “STOP”.  You “STOP” at the “START” sign, zero your odometer and look to your “time of day” watch/clock.  For us, that “time of day” watch is on the left side of our highly technical bank of three watches.  At the start of each day, participants are invited to synchronize our “time of day” watches with the rally’s master clock system.  As soon as the “time of day” watch zeros out on a new whole minute count, two things happen.  While the driver takes off in an effort to get the car up toward the target prescribed average speed, the navigator activates a stop watch.  In our case, we activate the center watch. 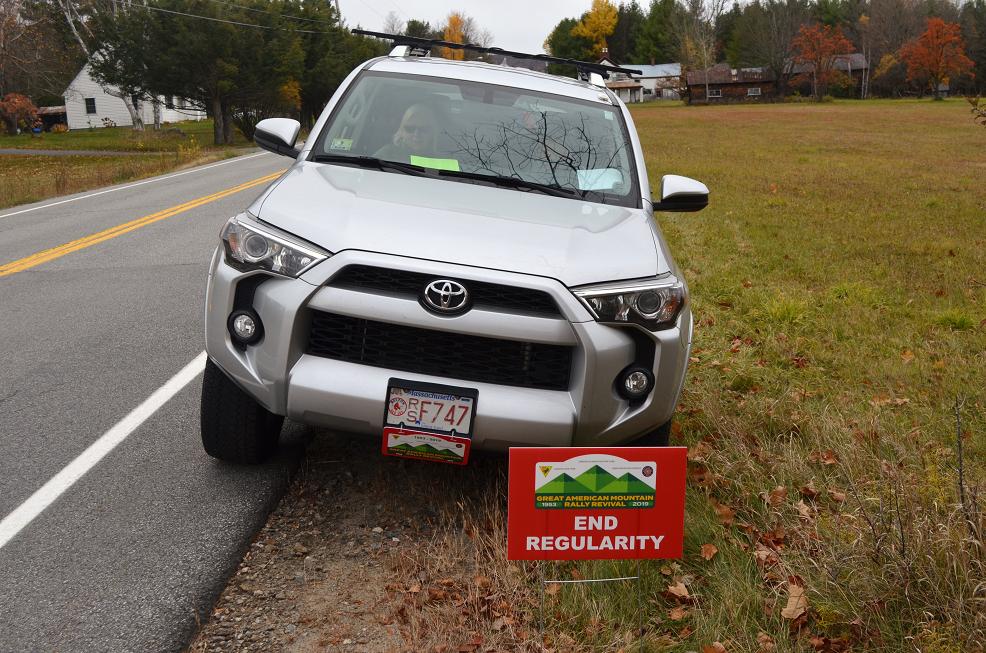 Notice that there is NO distance provided for when to expect the end of any Regularity Section.  Basically, rally teams are instructed to watch for any visual clues provided, in this case a “Speed Limit 45” sign.  In addition there will be a red “End Regularity” sign as well as the rally official’s car.  The rally official’s job is to click his or her master clock as each rally participant passes the End Regularity sign. 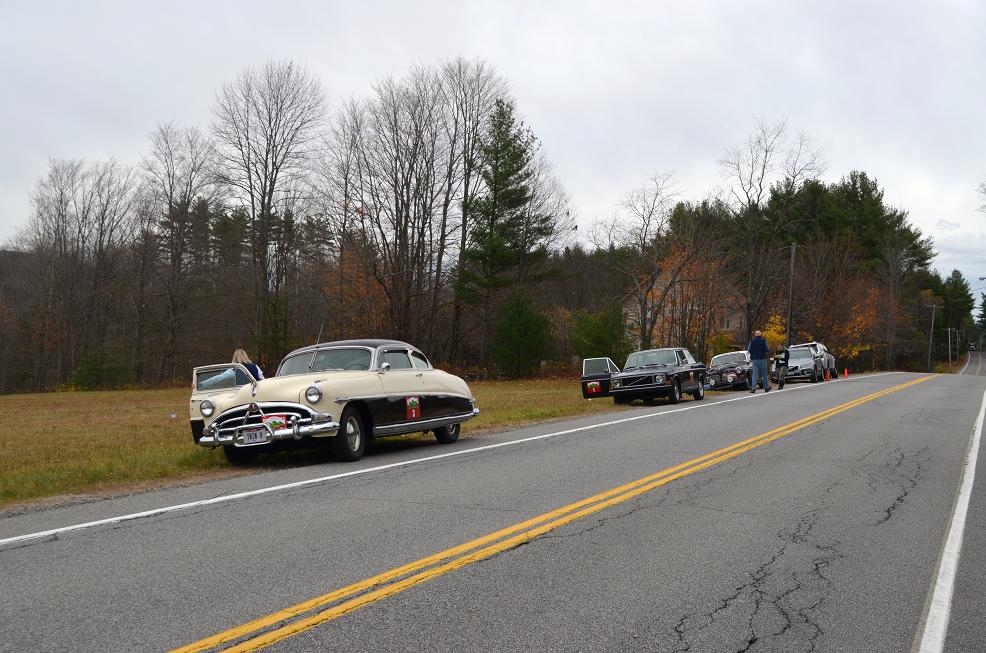 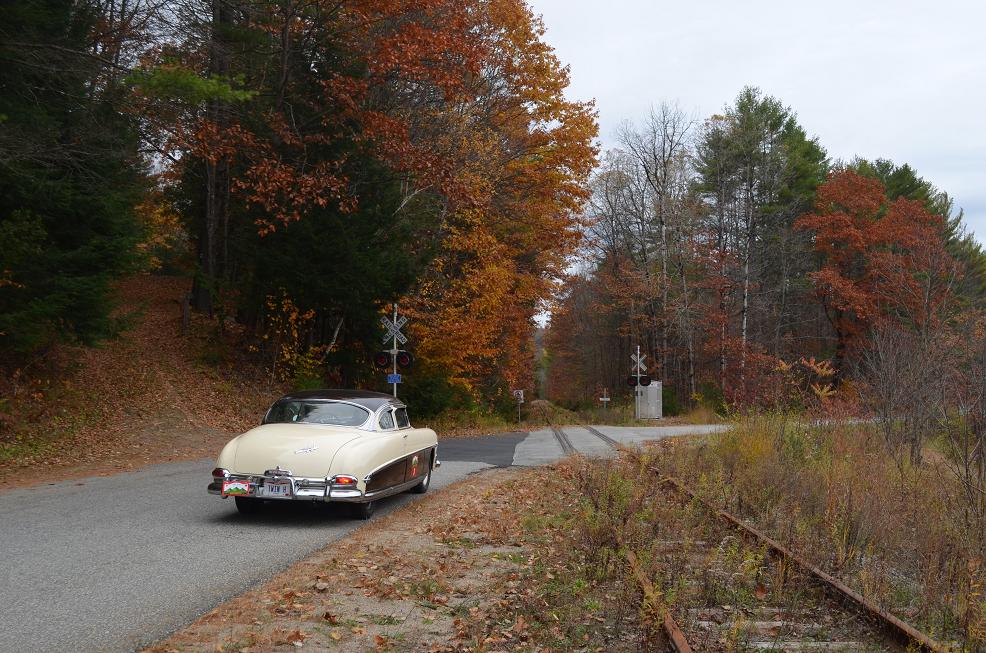 Between Regularity Sections tensions are eased and participants were able to enjoy the autumn colors that were still plentiful in the southern portions of the Adirondack Park.

Lynn and I still don’t know what happened on the day’s 2nd Regularity Section.  It was a section of moderate length, varied road surfaces and average speeds as low as 10mph and as high as 45mph.  Somehow at the end of the section we learned our time was more than 3 minutes too long!  We have both concluded that we simply had to have written down the wrong start time.  There were no other encounters that delayed us in any way.  It remains a puzzling mystery that cost us nearly 200 penalty points, more than five times higher than any of our other regularity penalties.

Shortly after we had completed the day’s 3rd Regularity Section we came into a town of Long Lake where we had an opportunity to fill our gas tanks and our stomachs. 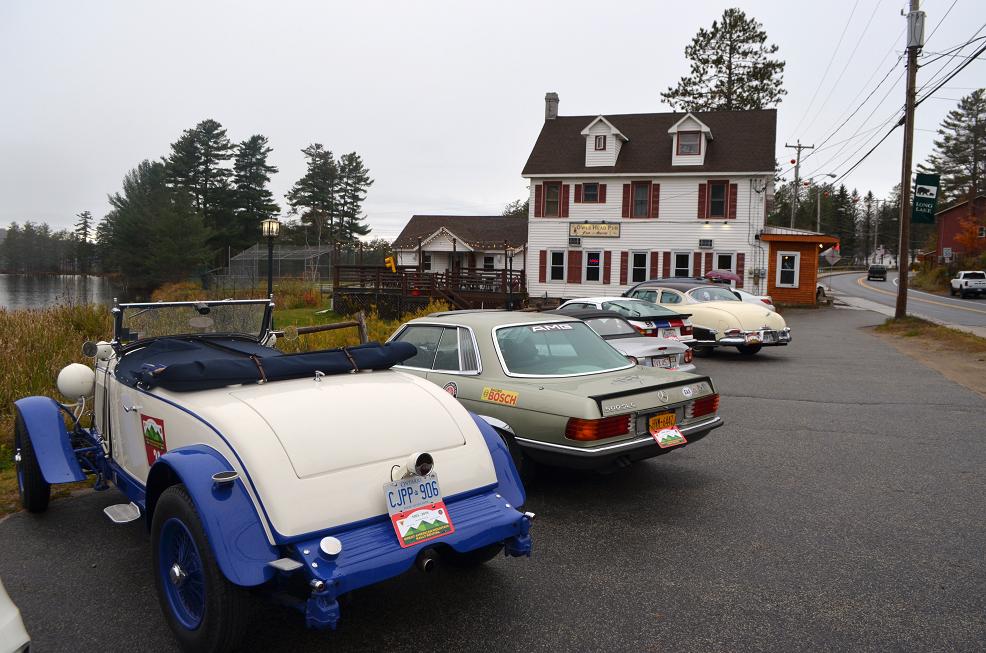 Many of the rally cars ended up at the Owl’s Head Pub for lunch.  The poor waitress was quickly overwhelmed by the unanticipated onslaught of strangers.  Lynn and I took our lunch to go so we could be back in line to resume the rally at our prescribed time of 1:43PM. 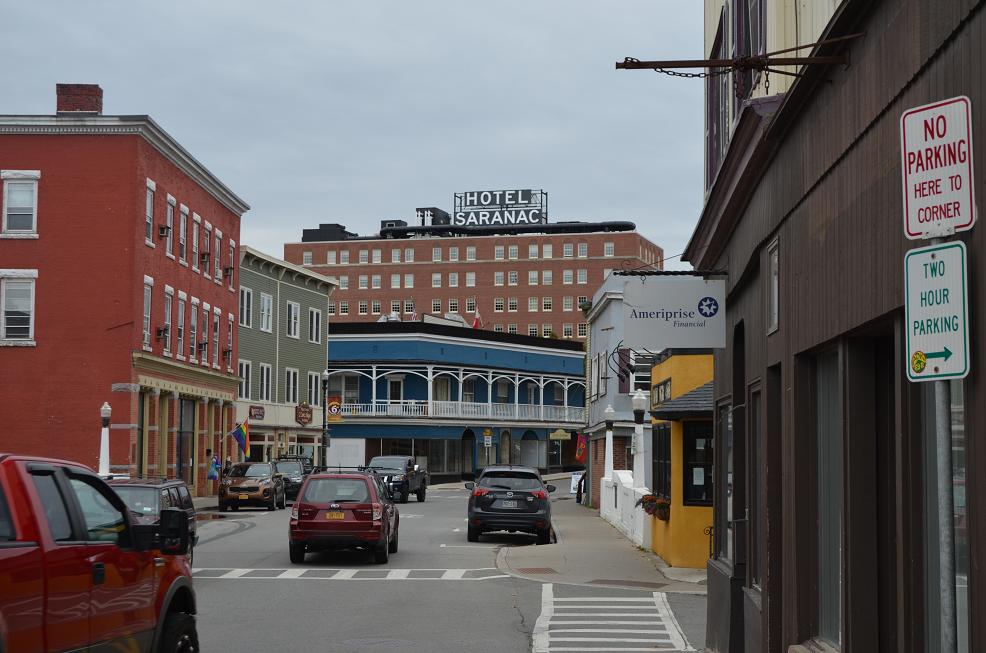 The afternoon route took us through a handful of those 102 Adirondack Park towns and villages.  We quickly noted that the towns and villages typically take on the name of the lake around which they were settled; Tupper Lake, Saranac Lake, Lake Placid. 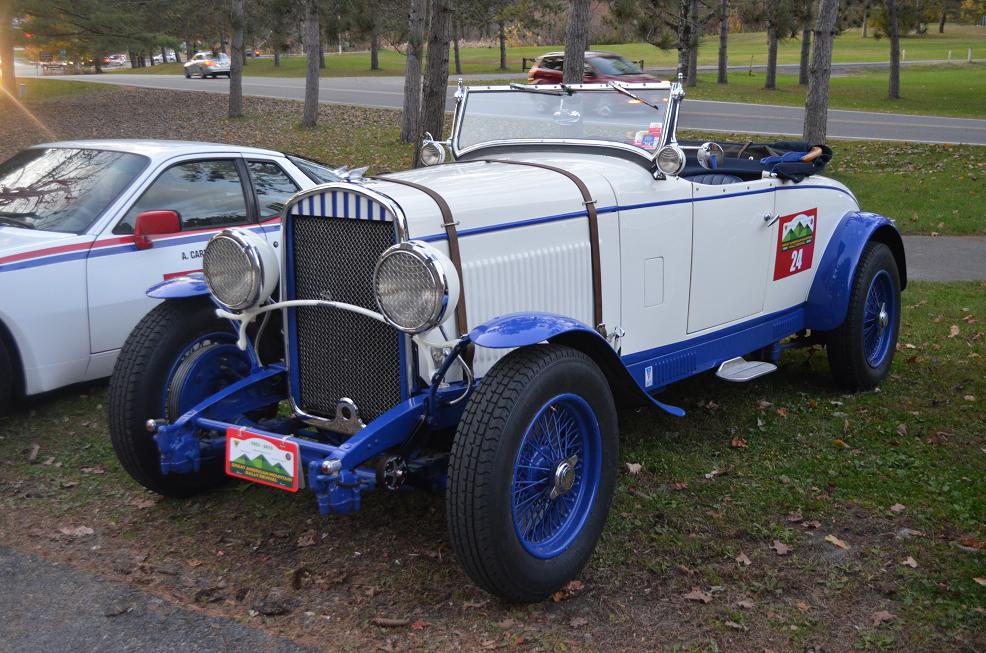 As we approached the outskirts of Lake Placid the rally came to a rather sudden and unfortunate end for Dave Smith and his son, Tom in the #24 car, a stylish 1930 Chrysler.  As they attempted to hustle off of Pine Street and into the traffic on Highway 86 their clutch failed leaving them poweless at the side of the road.  As they were working to set up their emergency road-side reflective triangles, Noel and Cynda Renner pulled in behind the Chrysler with their mighty 1954 Hornet.  Noel and Tom each had come to the rally equipped with a tow strap.  Noel maneuvered his Hudson up in front of the Chrysler and they used the two straps to link their classic cars.  Slowly but surely Noel and the Hudson pulled the Chrysler out onto Highway 86 and the remainder of the way into and through Lake Placid.  It was rally camaraderie and heroism of a type that was probably never seen during the original GAMR years.  I only wish I had been there to get a picture or two.

And speaking of Lake Placid, Lake Placid was Day 1’s route end target.  The village of Lake Placid is nestled between two stunning north Adirondack lakes, Mirror Lake and well, Lake Placid.  Few villages of just 2500 people are as well known as Lake Placid.  That largely stems from the fact that both the 1932 and 1980 Winter Olympic games were hosted here.  It was here in Lake Placid where the US Hockey team saw their “Miracle on Ice” victory over the Russians during 1980’s games. 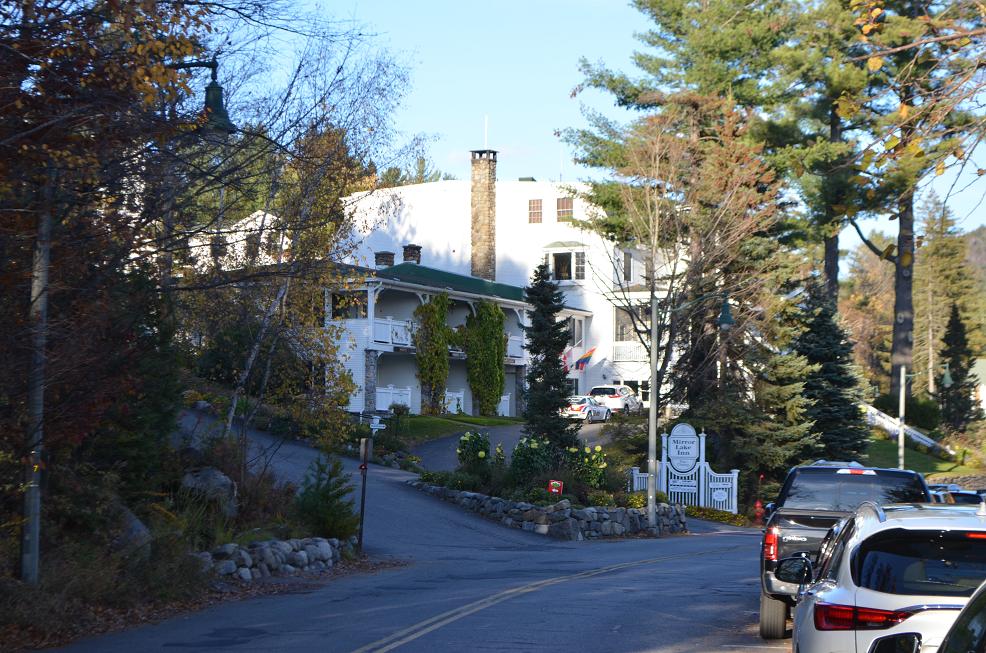 Rally participants all closed their day at the spectacular Mirror Lake Inn. 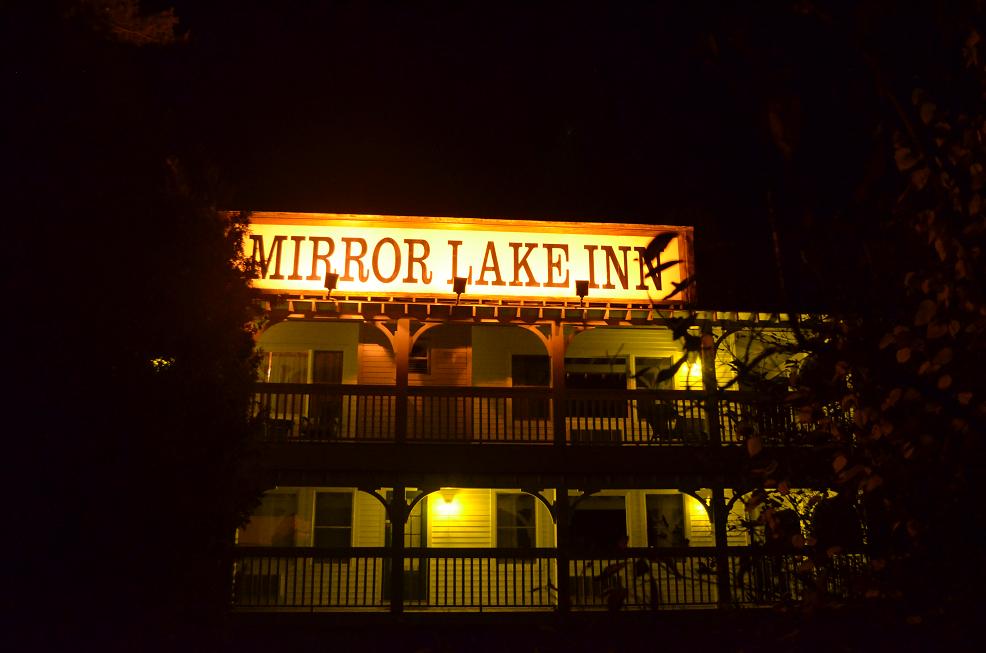 Even the Hudsons looked comfortable settled in for a night’s rest before the dawn’s resumption of the rally route. 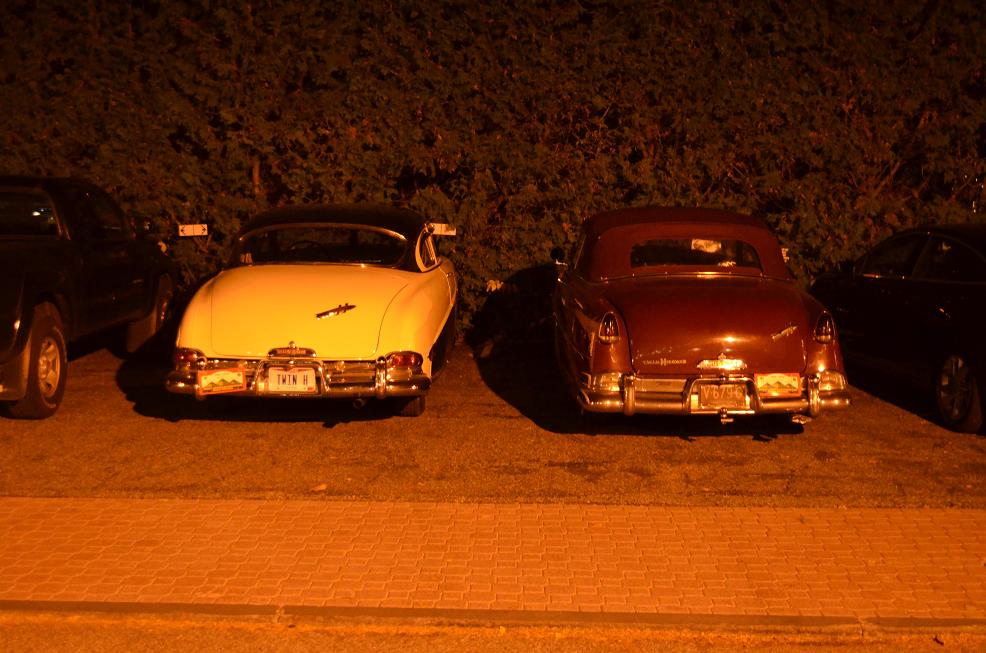