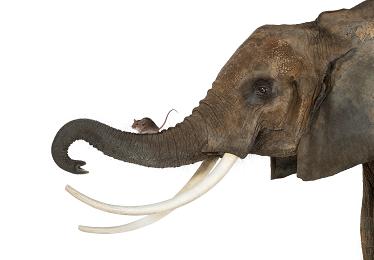 Do you know the story of the seven blind mice and the elephant?  The mice discover something new and strange by their pond.  One-by-one they go out to explore the new item.  The first mouse reports the “something” is a pillar.  The second found a snake.  The third perceived a spear.  The fourth mouse discovered a great cliff, while the fifth discerned a large waving fan.  The sixth returned with stories of a rope.  Arguments ensued among the mice until the seventh ran out to explore the something from one end to the other, the right side and the left.  She returned to report it was as sturdy as a pillar, supple as a snake, wide as a cliff, sharp as a spear, breezy as a fan, and stringy as a rope.  Altogether the “something” was an elephant!

My aunt came to me with a dental dilemma that taught me anew the lessons of the seven mice.  She had fractured and lost a tiny lateral incisor tooth that had been squeezed between a large central incisor and her cuspid that was crowded up high and out against her lip.  Efforts to replace the broken incisor had failed back at home in Pennsylvania.

My initial efforts focused on having a laboratory complete a simulation of the replacement tooth in wax that I could copy in porcelain.  When the wax model returned from the laboratory I was struck by just how ugly that little tooth looked shoe-horned between that misplaced cuspid and the large central incisor.  And then, it hit me!  In looking at that wax tooth on a plaster model of my aunt’s teeth it occurred to me that I didn’t need to replace her missing tooth at all!  All we need to do is move that misplaced, crowded-out cuspid tooth down into the slot where the lateral incisor tooth had been.  Her win-win orthodontic fix will eliminate the crowding and fill the gap!

The moral to both of these stories….  “wisdom comes from seeing the whole”!